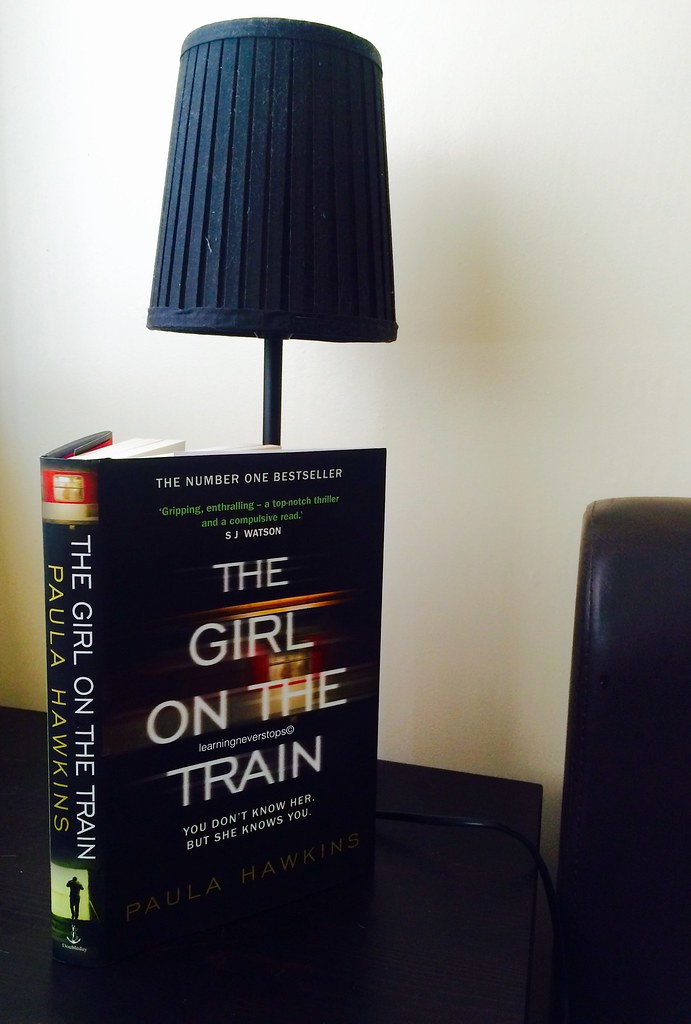 I picked up this book yesterday to give myself a break from academic reading and writing. I rarely read fiction books but I was persuaded (thankfully) by one of the store assistants at Waterstones to check this ‘unputdownable’ book. Three minutes later, I found myself buying a book that I know nothing about.

I started reading it as soon as I got home late yesterday afternoon. The next thing I know, it’s 10pm, I missed supper and I’m on the last chapter! Needless to say, I finished it in less than 5 hours!! This thriller/suspense/crime/mystery/romantic fiction novel was so gripping and full of twists and turns, that I wanted to know what will happen next.

It’s been a looooong time since I’ve read a book from cover to cover without putting it down. It is THAT good!!

So if you’re looking for the next exciting book to read, read this. I cannot recommend it enough! Hurry before they turn it into a film and ruin it!

If I were to write a non-academic book, I would write one that is full of compliments. Probably 1,095 compliments – enough for 3 compliments a day for a whole year. Why? Because there’s enough books, articles and blogs that tell you why you’re living you’re life wrongly. I want people to pick up my book, open any page and read something that would make them feel better. How would the blurb go? Like this:

In need of a heartfelt smile? Open this book at any random page, read a few lines, and voila!

[In response to Daily Prompt: BYOB(ookworm)]

Yes, it is a positive one.

I know, not everyone with Autism/Asperger’s are the same.

Yes, I recommend it.

It’s about a parent who accepted that her child is different but rejected others’ advise to allow this difference to become debilitating. This is about a parent and child’s amazing journey in life where they allowed Autism to be a part of their lives. They accepted it, lived with it, and saw its positive side.

I thought about Gillian Flynn’s Gone Girl whilst looking at this graffiti in London.

In response  to this week’s Weekly Photo Challenge: Cover Art

Today’s Daily Prompt: Take a look at your bookcase. If you had enough free time, which book would be the first one you’d like to reread? Why?

The Secret by Rhonda Byrne is one of my guilty pleasures. Reading and believing it goes against my scientific background as its claims are not truly based on empirical evidence. Despite this, I read The Secret at least once a month. Reading it makes me feel better. It reminds me to be grateful and to believe that everything is possible. I use The Secret’s three steps of Asking, Believing and Receiving all the time. It’s a great book which everyone should read!

I have just bought this book from Waterstones today.The Reason I Jump: One Boy’s Voice from the Silence of Autism is a book written by Japanese writer Naoki Higashida, who himself has been diagnosed with Autism. Naoki wrote this book in 2005 when he was 13, and was only published last year. I have read the reviews which seem to be mixed. On the one hand, it is being praised as it shows the positive side of having Autism and the book is in-line with parents’ hopes for their children who are on the Autism Spectrum. However, some are critical as they argue that Naoki does not speak for all of those who have Autism.

I have not yet read it, but I am very excited to start. No need to ask me what my weekend plans will be!!

Today’s Daily Prompt: Where do you produce your best writing – at a desk, at the phone, on a noisy cafe? Tell us how the environment affects your creativity. 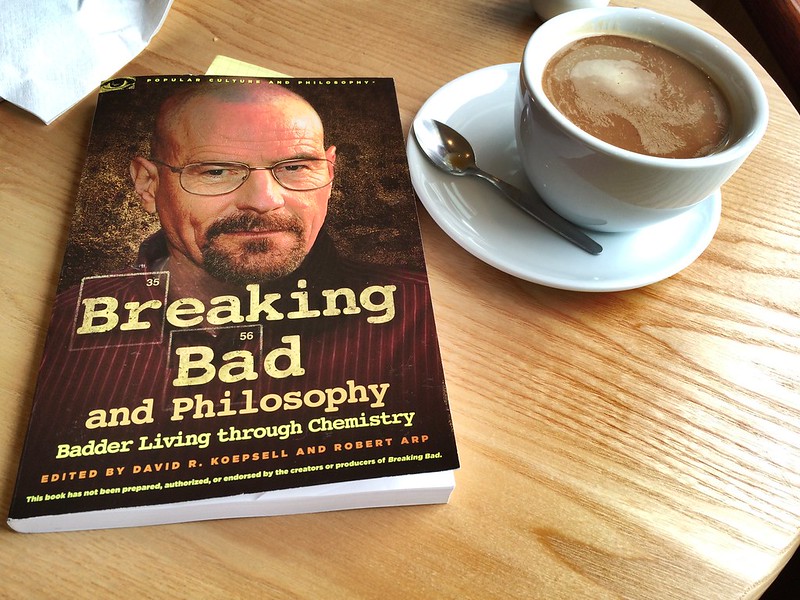 I do alot of my reading and writing during my breaks and lunch times as I have a fairly busy and active schedule. The school that I am working at for the past few years is very close to a Costa Coffee house which is fairly quiet during lunchtimes. After having some food in school, I run to Costa, order my usual (small americano) and get tucked into a book or get lost in writing one of my blog post. In fact, I write over half of my Master’s thesis in Costa!

Although it is usually very noisy at Costa, I have never been bothered by the noise. I know that the people in there are not there to talk to me and they don’t particularly want to be listened to. This and the fact that I have a time limit of less than half an hour makes me concentrate even more.

the life of T

A Pulitzer-Winning reporter is writing an in-depth piece about you. What the three questions you really hope she doesn’t ask you?

This is a hard one as I am as open as anyone. I always feel that I have nothing to hide and I believe that there are only a handful of questions that I would not answer. Anyway, here goes:

These are the three questions I wish the reporter would not ask me:

Tucked in the corner

From one crazy life to another

Chronicles of an Anglo-Swiss

A penny for her thoughts

Homeland is one of the most popular TV shows in America and is getting more and more popular around the world. In 2012, it has won 6 Emmys including best lead actor (Damien Lewis) and lead actress (Claire Danes) in a drama series, 2 Golden Globes and many more. Recently, it was awarded the best drama, best actor (Damien Lewis) and best actress (Claire Danes) at the 2013 Golden Globe awards.

If you have not watched it or at least heard about it (were you hiding in a hole somewhere?), Homeland is a drama series about Carrie, a CIA agent (Claire Danes) who believes that Nicholas Brody, an ex-prisoner of war (Damien Lewis), is a converted terrorist and is planning an attack on American soil. Despite Carrie’s brilliance, her colleagues do not always trust her decisions because of her unorthodox ways of working.

What is more interesting (for me, at least) is the fact that Carrie is suffering from bipolar disorder (Manic Depressive Disorder). In the first series, she tried to conceal her illness from her work colleagues because she is afraid that her colleagues will lose their trust on her, or worse, she could lose her job. She gets her medication from her sister, Maggie, who is a trained and practicing psychiatrist. Maggie issues Carrie pills ‘under-the-table’, and these pills seem to manage Carrie’s condition.

Many have weighed-in about Homeland’s portrayal of bipolar disorder, with some applauding it’s bold yet sensitive writing while some claim that the show’s representation is irresponsible. Negative points stem from the fact that Carrie is being treated secretly and unofficially, which could encourage the public to do the same. Additionally, some argue that Carrie’s high level of intelligence, confidence and success paint a wrong representation of people with bipolar disorder.

In my opinion, Homeland’s creators, writers and indeed, Claire Danes, are doing a magnificent job. Firstly, they have a person with psychiatric condition at the centre of the show and as a protagonist. Normally, characters with psychiatric conditions are portrayed as bad/evil (SEE MY ARTICLE ABOUT BATMAN: THE DARK KNIGHT). It is somewhat refreshing to see someone like Carrie being the centre of the plot. Secondly, the programme shows both the highs and the lows that a person with bipolar disorder might experience. Carrie is known to be a ‘genius’ in her own right in what she does. However, her behaviours are somewhat erratic and she has the tendency to break down if pushed too much.

It is important to note that Carrie’s case is an extreme one. Not everyone who has MDD is a genius like Carrie and not everyone’s situation can be managed by pills, just like Carrie. However, her situation is representative of what people with mental illnesses go through everyday. Over 60% of women employed in the United Kingdom are living with a mental illness. These people try their hardest to manage the stresses and strains of each working day, just like Carrie. However, they are all not CIA/MI5 agents like her. They are teachers, shop assistants, doctors, nurses and lawyers, trying to function well in this society. Nevertheless, we need to understand them and give them the right support to flourish.

Homeland also brings about the existing stigma about people with mental illnesses. As mentioned, Carrie did not conceal her illness to her work colleagues until the end of the first series, because she was afraid that she could lose her job (which she did in the end of the first series) and the trust of her colleagues. Unfortunately, this reflects much of what is going in the ‘real world’. A lot of workers hide their mental illness, and are scared to ask for help because of the stigma- which should not be the case. Workers are protected by the Equality Act 2010 which states that:

“…most employers have no right to ask for information about your health when recruiting. However, in an interview, they can ask whether you have the ability to do key elements of the job. There is also a specific exception in vetting applicants for work in national security such as intelligence services. If your mental illness has lasted 12 months or more you are likely to have rights as an employee under the Equality Act. Telling your boss, occupational health or human resources department will mean your employer is obliged to consider making ‘reasonable adjustments’ to your working life to help keep you well. You can ask them not to tell colleagues, but they may need to tell the human resources department.”

I feel that the inclusion of this issue in a well-known show like Homeland may increase people’s awareness of it. Hopefully, it will result in more people opening up to their significant others and it may also increase people’s understanding of mental health. One criticism that I have though, is that in the show, Carrie has not received any other psychological treatments apart from medication, although in the end of the first series, she underwent Electro-convulsive Therapy (ECT). Although ECT is still a controversial treatment, there are studies that have shown that it can be effective. Cognitive-behavioural therapies (CBT) coupled with the right medication has been shown to be the best treatment for people with bipolar.

Finally, the best thing about the show is that Carrie does not let her condition define her. She struggles with it at times, but she copes with it. She does not use it as an excuse forany bad things that happened to her.