I can’t remember the last time I bragged about people following me on Twitter, but it’s Dr. Temple Grandin!! I’ve admired Dr. Grandin’s work for a very long time and she has has been one of my inspirations throughout my adult life, so you can’t imagine my excitement when she follwed me! 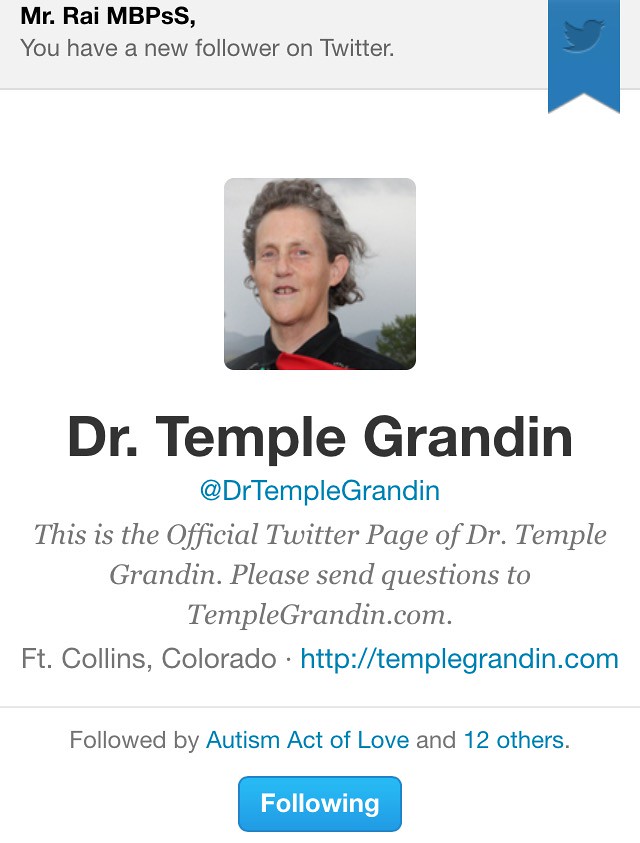 Below is David Beckham’s message for Neymar Jr. posted on Twitter: 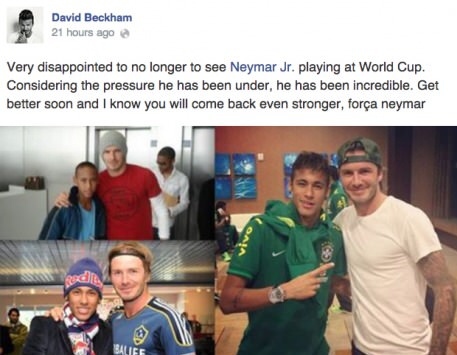 Kevin Healey is one of the UK’s leading Autism Awareness campaigner and a councilor for the National Autistic Society in the UK. He has been campaigning for Autism rights for over a decade and has inspired loads of people, incluing myself. As a person with Autism, Kevin understands what others like him are going through. People with Autism have different developmental trajectories, particularly in areas of social interation and communication. In addition, some may be hyper- or hypo- sensitive to sensory stimuli such as noise or bright lights. These, coupled with other people’s lack of understanding of the condition could lead to prejudice and negative attitudes.

As he recounted on his speech in this year’s Autism Show, Kevin himself has been a victim of bullying throughout the majority of his life. Being a victim of bullies has had a detrimental effect on his worklife, academic achievements and personal sense of security. He has been targeted in school, at work and even on the internet.

As a result of his experiences, Kevin decided to launch an anti-bullying campaign in order to protect people with Autism from being the target of bullying and other hate-related acts. Kevin has experienced and has seen enough victimization in his life and has decided to act upon it. Kevin, along with his supporters, are still pushing for this campaign to be supported and shown in billboards (which will be displayed very soon, nationally) and all media outlets.

He is currently pushing for a law against ‘HATE CRIMES AGAINST THOSE WITH AUTISM’, which garnered a lot of support from celebrities such as Ricky Gervais and Katie Price, and from local MPs. The UK parliament website states:

That this House congratulates Kevin Healey, an Ambassador for the National Autistic Society, who has been helping to raise awareness of hate crime, including cyber-bullying, trolling, stalking and physical bullying, against those suffering with autism through a highly successful Twitter campaign and a Global Anti-Bullying Autism Campaign; notes that the campaign has received the backing of celebrities such as Ricky Gervais, Katie Price and Melanie Sykes; further notes concern at the findings of a National Autistic Society survey that revealed 81 per cent of respondents having experience of verbal abuse, while 47 per cent reported that they have been victims of a physical assault, and that 24 per cent had been victims of cyber-bullying; and finally, calls on the Government to review urgently legislation and police recording of disability hate crime in order that victims can be confident that their suffering will be taken seriously and ended.

Kevin is the epitome of resilience. Despite his negative and (possibly) traumatic experiences in the hands of ignorant others, he did not stop. He wanted bullying and victimisation to stop, and he acted on it. His campaign will not only benefit himself, but thousands if not millions of others will greatly benefit from it, too. Everyday, he is proving to me and everyone else that people with Autism are a major part of society. He challenges negative stereotypes day after day, through his work which is fuelled by compassion and desire to help others and make this world a better place. I am sure that there will soon be a law to protect people with Autism against hate-related acts, and it will be because of Kevin Healey.

You can help by following Kevin on twitter (@Kevin_Healey )and retweeting his campaign-related tweets. You can also join the twitter storm every Thursday nights in order to get this topic trending (note that the more people we reach, the more this campaign will be successful). Please visit Kevin Healey’s Autism Awareness Campaign website for more information: www.autism-campaign.co.uk

Inspiring Artists who have Autism